Blog for people who are insecure and in security

Ansible is a host and infrastructure management tool used by many of the DevOps engineers that I have interacted with in my career. I have really fallen in love with using it myself and I am working on automating a number of things in my personal and professional life with Ansible. While doing so, I stumbled across a vulnerability in Ansible, which has helped me realize how high-value of a target for attack Ansible controllers ought to be considered by the organizations using it to manage their production infrastructure.

I was working in the lab, late one night

When my eyes beheld an eerie sight

From the console tab, errors began to rise

And suddenly to my surprise

it was a controller crash

(The controller crash) It was a template execing crash

(Debug the crash) when using a vertical slash

(I fixed the crash) one-liners still look like trash

Ansible is one of those tools that’s basically a full-fledged programming language pretending to be a YAML config. Since Ansible is capable of running the same tasks against a variety of different hosts, facts are what Ansible calls host-specific variables. Ansible Galaxy is also mentioned in this post and is essentially a package manager for sharing Ansible playbooks. YAML configs have a several more niche features that one might not expect, but one of the more common ones is its multi-line string feature, which lets you split up a long string across several lines.

How the issue presented itself

I was trying to make an Ansible playbook to merge different Packer templates into one and some of the Jinja2 filters in Ansible were getting pretty complex. To make things a bit more clear in the code, I decided to use YAML’s multi-line string feature in some of my set_fact tasks. When I did so, however, I started to get an error like the following: 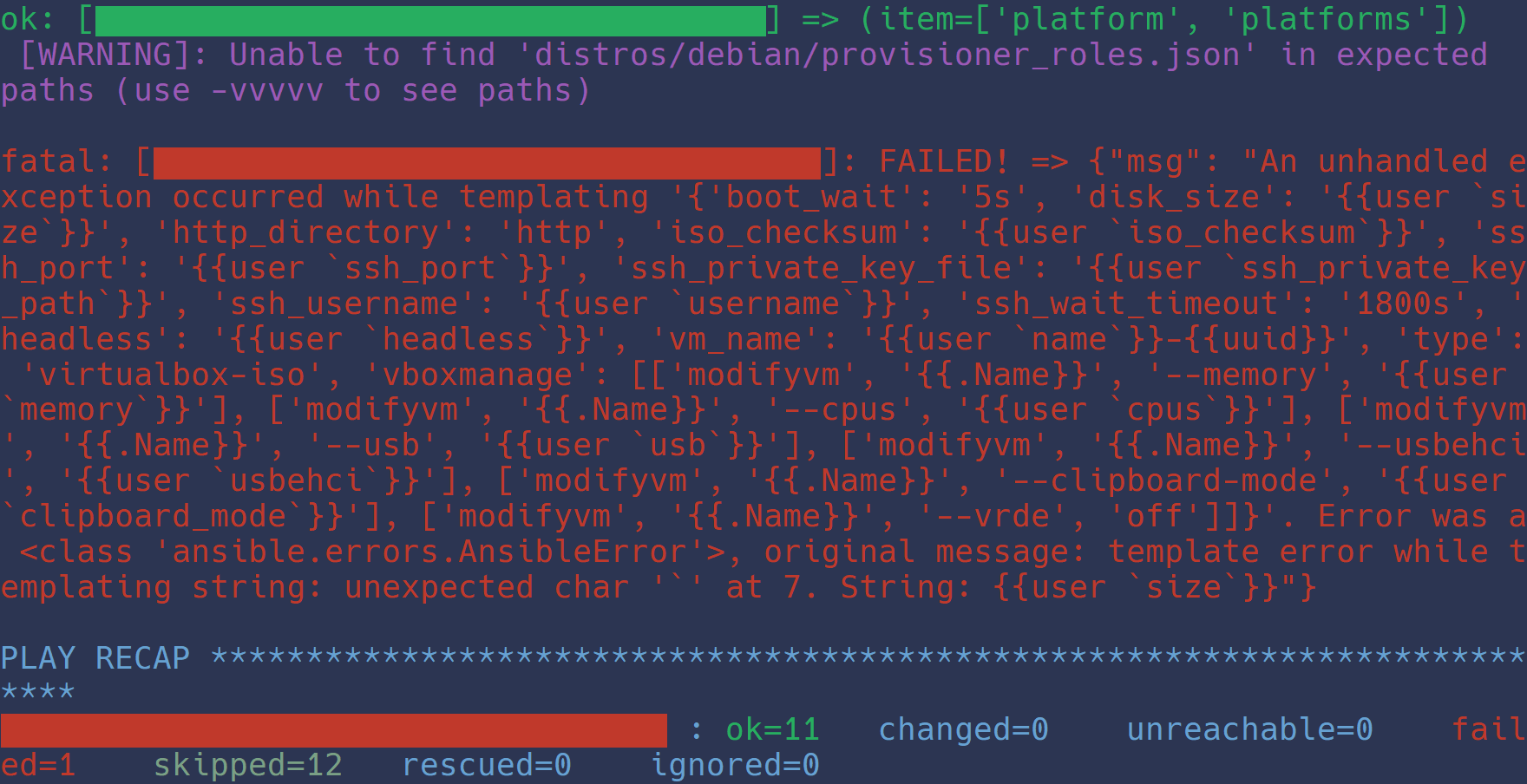 After some debugging, I switched to only use single-line yaml strings, and the issue fixed itself, so I moved on to the next part of my project. There was still this nagging feeling about the error as I moved on in the project though. The error never came up for any of my other playbooks with multi-line Jinja2 filters, so why would it be happening here? Why would the error mention Go-style templates instead of Ansible’s Jinja2-style templates? When I started to realize what that error was actually saying, I began to look at the issue from the perspective of a security researcher instead of as an end-user.

The error was coming up because the Packer templates that were being set in facts utilize Go templates, which were being evaluated by the Ansible controller. Facts were executed as templates only when the payload is in the output of a multi-line YAML template in a set_facts task it seemed.

The playbook below demonstrates the difference between how a single-line and multi-line template is handled. The script reads and parses the file in /tmp/payload.json, adds a field to the object, and writes the contents to /tmp/output_*.json files. The /tmp/output_safe.json file represents the behavior when using single-line fact-setting templates and the unsafe counterpart uses a multi-line template.

The payload in the example will allow a targeted host to read the ~/.ssh directory of the controller running the playbook, but it could be used for plain-old RCE as well.

In a worst-case scenario such as the one demonstrated in the above example, an attacker could leverage an unprivileged position on a compromised host to escalate their privileges to that of the controller. Ansible controllers often contain broad privileges in an environment and will at the minimum yield control over the other hosts that are managed by the controller. Ansible controllers are often just running on engineer workstations without any protections. I am not personally familiar with all of the mitigations that Red Hat’s enterprise offering, Ansible Tower may provide against such an attack. The fact that Ansible Tower it is a multitenant exeuction environment likely means that they have provided the option to restrict the impact of a compromised Ansible playbook by configuring playbook executions and their privileges to be isolated from eachother.

For Organizations wondering if they are vulnerable

I was only mildly concerned by this for my use-case because the Packer templates I was using were also files on the controller that I own. Many Ansible users will likely not be in the same situation as their facts are coming from less trustworthy sources, like the hosts that are being managed. Others will also not have the benefit of routinely using Ansible template characters in their fact contents, which would trigger an error to alert them in the same way as it did for me. The set_facts module is very commonly used in Ansible and multi-line YAML strings are a relatively common practice for representing complex operations like the ones that might be in a set_facts task.

For Attackers who have compromised a host

Even with the high likelihood of this issue being exploitable in some form in many environments, this will be relatively difficult to pull off in the wild. I think that the attacker in the right situation could find it the perfect fit though. Attackers need to consider the following things when assessing if a compromised host will be able to utilize this vulnerability to escalate privileges in their target environment:

If so, it sounds like it might actually work! The example payload I provided shows all you need to get a basic RCE if the fact is pretty straightforward.

Technically this is possbile for anyone who is able to influence a value that ends up in the value for a fact generated from a multi-line template. It might be useful to review popular Ansible galaxy playbooks to see if any of them are trusting a property that you can control in your particular environment. For example, if you are aware that a PaaS is heavily-utilizing Ansible in managing their users’ infastructure, then providing Jinja2 filter payloads in available inputs could be a lucrative venture.

I haven’t heard anything about a patch yet, but Red Hat said “Since the issue is already public, I believe its ok for you to publish it in your blog now.” when I asked so shrug.

When I looked into it, Ansible has a bit of a history of template injection issues. Though this is expected as template evaluation is a core feature and template injection is a tough issue to solve. Here are some Ansible CVEs with the same CVSS score as mine and which feel related from briefly looking at titles:

I haven’t really researched if this problem shows up for other Ansible modules, so that could yield more findings. I am also interested in looking into tactics that an attacker in a black-box scenario would be able to use to identify that they are running on a host that is being managed insecurely so that they could use this technique effectively. Ansible Tower’s attack surface is also very interesting to me to see what of the long-term mitigations detailed below are implemented, as well as to understand what other mitigations they were able to think of.

Ansible isn’t patched against this at time of writing, but update when that comes out.

Don’t use multi-line YAML strings in your Ansible playbooks for the time-being I guess? With the caveat that it’s only exploitaable when the multi-line template is in a set_fact task and the output includes attacker-controlled values. YAML multi-line strings come in several forms so check out https://yaml-multiline.info/ for more info.

Template injections like the one I stumbled across are unfortunately common in Ansible and should be considered as an eventuality to organizations hoping to be proactive about for 0day attacks or who want to compensate for poor patching practices. Consider the value Ansible presents as a target for privilege escalation in your environment. The industry really needs to start thinking about the tools we use to manage production environments as being part of of our production environment’s security ecosystem. The following are some mitigations we can put in place for when a controller is eventually compromised by either an insider threat or vulnerability:

Organizations who aren’t already should expand the scope of their security reviews to include their deployment logic and infrastructure. For one, more transparancy that the security team can get into the things they are protecting means they will have more perspective when reviewing the system, and the higher quality recommendations they might be able to provide. Specifically for this issue, there would be no real way for a security team to identify this issue barring an accident unless playbooks themselves are in scope for review. Even in the absense of vulnerabilities, executing unreviewed Ansible playbooks against production environments could be very dangerous from the perspective of insider risk depending on the organization’s tolerance for things like that.